The Women’s March Global Team is a global all volunteer team dedicated to supporting the mobilisation of impactful actions to defend women’s human rights globally. 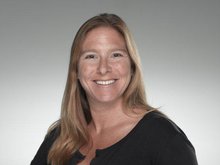 Betsy Scolnik has had the opportunity to work for the world’s leading commercial and philanthropic organizations. She is a communications and content strategist that focuses on measurable change and impact.

Scolnik also held a wide range of multi-platform content development, operational, communications and strategy roles, including senior roles at AOL Time Warner and Xerox. At AOL she led their digital entertainment programming and promotion outside of the US and was the lead producer of the Live 8 global concert.

Scolnik was the co-producer of TEDWomen from its beginning in 2010 through 2016.

Betsy’s expertise and experience in the connection of audience targeting, distribution, and measurement has given her the breadth of knowledge and passion required to have impact in a multi-platform world.

Betsy earned her degree in International Relations from the University of California, Berkeley and attended New York University’s graduate school. Betsy is also fluent in Spanish and conversant in Portuguese, French, and Italian.

Betsy is the Chair of the Board of Directors for Women’s March Global Inc. 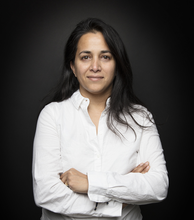 Uma has organised and built coalitions around the issues of women’s human rights defenders, freedom of association and assembly, bodily autonomy, LGBTQIA+ rights, and white supremacy in the women’s rights and funding space. As a leader in the global women’s rights movement Uma has been interviewed by CNN, AlJazeera, Jane Dutton, Newsweek, Devex and published by Ms. Magazine, TIME, and IPS.

Uma helped to bring Saudi women’s rights activist Loujain AlHathloul’s story to the United Nations and was instrumental in coordinating efforts for Lina AlHathloul’s first statement in support of Loujain at the United Nations Human Rights Council. Uma and Lina are co-authors of the upcoming children’s picture book, Loujain Dreams of Sunflowers. Uma has been profiled by the Office of the High Commissioner for Human Rights in their I Stand With Her Campaign and is a noted speaker at global conferences. She currently serves on the board of directors of Minority Veterans of America and Women’s March Global and is the Initiator of and lead facilitator for The Racial Equity Index.

Michelle is a published author, keynote speaker, documentary filmmaker, and committed international human rights activist. She currently sits on the Leadership Team for the Dignity Network, a coalition of Canadian civil society organizations that work with international partners in support of the human rights of LGBTQI people globally; Executive Director of KyivPride Canada, a Ukrainian-Canadian coalition on LGBTQI rights; and gender diversity lead for Fierté Canada Pride.

In 2017, Michelle received a YWCA Muskoka Women of Distinction Award for her work in her local community in arts, culture, LGBTQI+ and women’s rights. Michelle is the Ambassador for the Women’s March Muskoka Chapter.

“When we come to truly accept and love our own uniqueness then, just maybe, we can come to respect the uniqueness of others.”

Michelle is on the Board of Directors for Women’s March Global Inc. 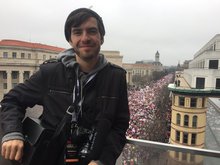 Jackson Hyland-Lipski is the Visual Director for Women's March Global, and is an activist and filmmaker from New York. Jackson also works as the Creative Director of Hood to the Holler. He founded Activism Media in 2020 to develop visual content and strategies for movements, organizations, and political campaigns such as Charles Booker for Senate, Amani Al-Khatahtbeh for Congress, Julie Oliver for Congress, Indivisible, Million Hoodies Movement for Justice, The Gathering for Justice, Immigrant Justice Now, and Indigenous People’s Movement.

From 2016-2018 Jackson was part of the National Organising Team for the 2017 Women’s March on Washington, and Digital Media Director for Youth Empower. In 2014, Jackson worked at Radical Media as Archival Assistant for Emmy winning and Academy Award-nominated 'What Happened, Miss Simone?', a Netflix original documentary about Nina Simone that premiered at the Sundance Film Festival in 2015. Jackson concurrently worked for the film's Producer Amy Hobby as Head of Development for Ms. Hobby's and Anne Hubbell's production company, Tangerine Entertainment, which produces films and other projects helmed by women.

Jackson Hyland-Lipski is a graduate of Northeastern University, where he received a BA in Film and Philosophy with a minor in Writing.

Jackson is on the Board of Directors of Women's March Global Inc.

Melissa Durrell is the Director of Media and PR for Women’s March Global. She's known for her distinctive storytelling techniques, which she honed at her former career as an award-winning Canadian broadcast journalist. She now uses her unique skill set to amplify change makers as president of Durrell Communications.

Melissa’s passion for communications has also led her to a career in politics. She is serving a second term as an elected official on Waterloo, Ontario City Council and is known for her aggressive leadership style and a “make it happen” attitude. She is active on several portfolios, including urban issues, community building, and green sustainable solutions.

Advocating for more women’s voices in politics and business has become Melissa’s side hustle, organizing and speaking at various conferences.

Melissa is the founder of the Z Film Festival, a non-profit film festival that showcases female filmmakers from across the globe.

Melissa is on the Board of Directors for Women’s March Global Inc.

Mwanahamisi Singano (Mishy) is African Feminist, who heads programs at African Women's Development and Communication Network - (FEMNET). She has extensive experience in socioeconomic programing, policy advocacy, and development campaigns. For over 10 years, Ms. Singano led and engaged in promoting and protecting rights of women in their diversities. In that quests, she has worked on climate change, violence against women, inequality, financial inclusion, women’s empowerment, land rights, farmers’ and food rights in different countries in Africa. Ms Singano is also a trainer, writer, and passionate activist.

Mishy is on the Board of Directors for Women’s March Global Inc. 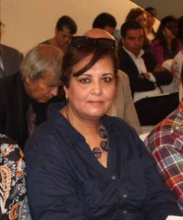 Najet Zammouri is a Tunisian human rights activist who has since the ’90s, fought for gender equality, the protection of individual and public freedoms, the abolition of the death penalty, and working for the strengthening of human rights culture and mechanisms.

Najet was elected the vice president of "La ligue Tunisienne des Droits de l'Homme", an association that has observed and defended human rights in Tunisia since 1976. La ligue Tunisienne des Drotis de l’Homme was awarded the Nobel Peace Prize in 2015 with three other national organizations, for its efforts to broker a peaceful political compromise in Tunisia in the wake of the Tunisian Revolution of 2010/11.

Najet is also the founder and president of a feminist association (Felha pour la Culture et la Citoyenneté) involved at the regional level (Ben Arous), the association has helped women who are victims of abuse to submit a file to the “Commission of dignity and truth “ within the context of the traditional justice. She is the co-founder of “Tunisian women against corruption network.”

For her work Najet has been honored by the president of the national commission against corruption and received the Anti-Corruption Distinguished Award. Najet is also a member of the international network of transitional justice and the network on "Torture & Terrorism " under the auspices of the OMCT.

Najet has spoken at multiple global conferences, has authored numerous articles and publications in relation to human rights.

Najet is on the Board of Directors for Women’s March Global Inc.

Charity Tooze is a results-driven social impact executive directing and leading impact strategies, partnerships, and organizational growth. She has successfully secured millions of dollars for critical social issues and has experience working with corporations, governments, foundations, NGOs, and hybrid platforms. Charity has over 20 years of experience working in the global intersectional feminist movement. Charity's creative approach to strategic social change has resulted in policy changes and influenced norms change on critical women and girls' issues. She has designed and led projects in South Sudan, Kenya, Nigeria, Pakistan, India, Afghanistan, Haiti, Dominican Republic, Germany, Japan, and across the U.S. She has a dual master's degree from New York University and a bachelor's degree from Mills College. Charity also sits on the Leadership Board of Women's Earth Alliance. Charity grew up with a single mother and was the first to attend college. She is a champion of the invisible and under-resourced. She is the proud mother of a future leader.

Charity is on the Board of Directors for Women's March Global Inc.

Prior to joining Women’s March Global, Maya graduated from the University of New South Wales, Australia where she received a BA in Fine Arts and Indigenous Studies, with a minor in Environmental Studies. Her final thesis addressed the reasons artists resist categorisation as Aboriginal while working to mobilise new representations of Indigeneity; looking at the relationship between Indigenous realities and curated histories in the context of expectations of art that is labeled Aboriginal. While at university Maya worked as a mentor for the Nura Gili Indigenous Tuition Program.

Maya is an artist, working primarily in sculpture, installation and film and is passionate about the role art plays in social action and activism, awareness raising and community building. Maya has worked as an aid to art therapists working with children and families in an Aboriginal community near Sydney, Australia. She has volunteered with the Lalela Project in South Africa, an organisation that provides educational arts for at-risk youth.

Maya has also volunteered at schools in Borneo and Zambia, and most recently accompanied Australian primary school students as a mentor to volunteer at a Montessori orphanage and primary school in Udon Thani, Thailand.

Join as a Partner

Join as a Member