“I march to save our communities from institutionalized violence, racism, injustice and inequality.” 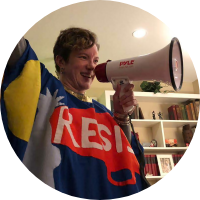 I was an organizer with Women's March Barcelona. See our 1st anniversary rally and dance party 21 January 2018: photo album and video

I also organized March For Our Lives Barcelona 24 March 2018.