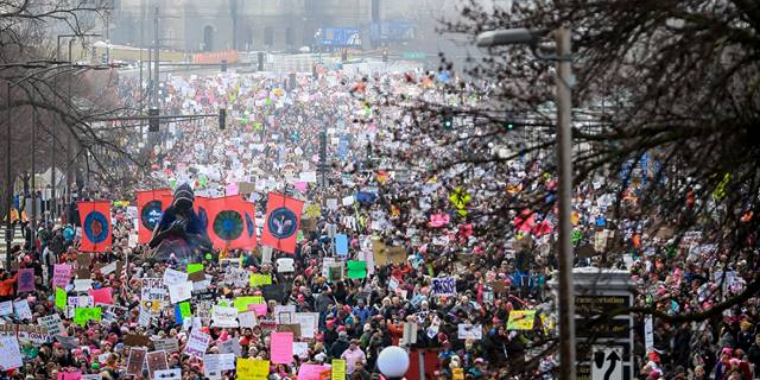 The language of the 2016 Presidential election cycle insulted, demonized, and threatened many of us — immigrants of all statuses, Muslims and those of diverse religious faiths, people who identify as LGBTQIA, Native people, Black and Brown people, people with disabilities, survivors of sexual assault — and our communities were hurting and scared. We were confronted with the question of how to move forward in the face of national and international concern and fear.

In November of 2016, 43 women gathered in a library in the suburbs of the Twin Cities. Hardly anyone considered themselves an activist; certainly no one had ever planned or organized a large-scale protest march.  Still, we wanted to send a bold message to the administration on their first day in office, and to the world that women’s rights are human rights. We had only eight weeks to make it happen. We held meetings, and our numbers grew. Members of newly-formed committees sent emails before work or late at night, or when the kids were asleep, or whenever we had a spare moment. We applied for permits, figured out porta-potties, and starting asking people to volunteer as march marshals. We discussed t-shirts, and fundraising, and getting the word out to all the corners of Minnesota.  We were hearing that as many as 30,000 people might show up. More than three times that number did.

January 21st 2017 became on of the largest rallies in Minnesota history as 110,000 of our brothers, sisters and gender non-identifying siblings showed up. That day, the message could not have been clearer: we are better together. No one who was there will ever forget the waves of people walking from all directions towards the Capitol, the packed light rail trains and traffic stretching out for miles and miles. 110,000 people chanted, held signs, listened to powerful speeches and musicians that shared messages about defending human rights, that positive change is possible and that our country can and must move forward instead of backward.

That day we became the largest single day protest in history as over 5 Million people marched around the world, on all 7 continents. But it didn’t end there, because in Minnesota, we have moved from a moment to a movement!

Donate to this chapter