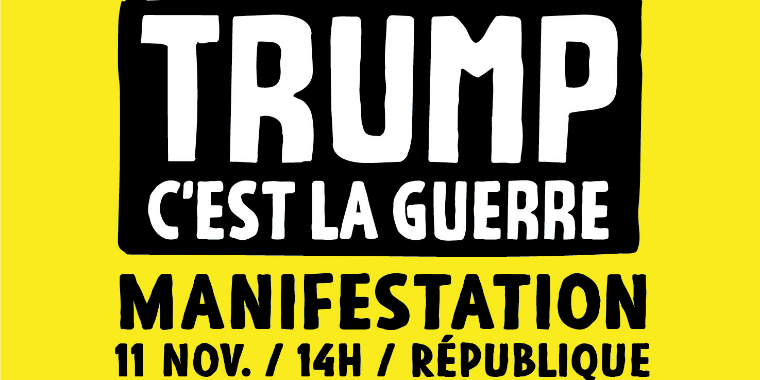 On November 11, 2018, France will commemorate the 100th anniversary of Armistice Day, the end of World War I, an event at which Trump will be Macron's honored guest. Extending such an invitation to the man who is waging war against us all is an insult that we refuse to accept.

Trump is the escalation of the “war on terror”, which has already resulted in the death of millions. The refugees and migrants fleeing the resulting conflagrations have been denied their human rights. In Palestine, Iraq, Syria, Yemen, the greater Middle East, and Africa, Trump and Macron beat the drums of war together. In the United States, children are imprisoned and separated from their families. Their only crime: being migrants. In France, Macron has refused to welcome refugees from the Aquarius, and the European Union has required border countries to set up centers for “sorting” migrants.

Macron's invitation bolsters the imperialistic and military ties among the US, France, and the whole of the EU. Trump has demanded that EU members and NATO massively increase military spending. Macron has announced an increase of 30% for France, while simultaneously slashing funds for social programs. This means less money for health care, education, families, and accessible housing: a blatant disregard for people's basic needs!

Trump is the living and breathing incarnation of sexism, homophobia, and xenophobia. He is waging war on us all. His and his administration’s crimes against women are innumerable. He actively promotes discrimination and violence against the LGBTQIA+ community. He openly fosters hatred and violence towards people of color, Muslims, and people with disabilities. We stand together to reject his divisiveness!

Trump is waging war on the Earth itself. Since 2017, he has ended the moratorium on coal mining on US federal land and Native American lands. He has reopened the coasts to oil and gas exploration and drilling. And these are just a paltry few of his crimes against the planet. Thanks to Macron and the EU, glyphosate has not been banned, there is oil exploration off French Guiana's coast, and aging nuclear power plants will be renewed instead of scrapped.

To commemorate the end of the First World War, Macron will honor the war machine that sent millions to the slaughter. Macron has invited Trump to participate in a solemn moment intended to remember the sacrifices of these soldiers. The two will then participate in the Paris “Peace” Forum. For Trump and Macron, peace actually means war.

We invite all people, political organizations, workers' unions, and non-profit groups to join us to protest this celebration of war on November 11, 2018.