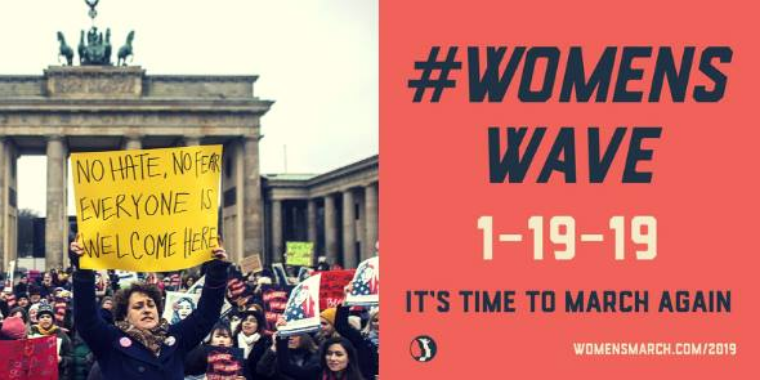 In 2017, women and men of diverse backgrounds, on all seven continents, gathered to show their support for a society that respects and defends the rights of women. This movement may have started in the United States, but the principles guiding it are universal.

The sister march held in Berlin on January 19, 2019 will be a sign of unity with women around the world and will be based on the leading principle: Women*s rights are human rights!

Regardless of age, race, gender, background or nationality, it’s important for us to all stand together to show our solidarity with women. We are stronger when we fight together and there are issues that are affecting women all around the world.

We want to come together to:

- Fight for economic equality and an end to the gender pay gap. German women are paid 21% less than German men.

- Support the right of women to have autonomy over their bodies. We demand the removal of Paragraph 218/219a, which restricts individuals’ access to abortion in Germany.

- Stand up against the far right, Islamophobia, anti-Semitism, and all politics of hate.

- Bring awareness to violence against women and demand action to end it.

For the third year in a row, we will be gathering and marching to remind Berlin, to remind Germany, and to remind the world that we are still here and we are still fighting. All women have the right to live in safe and healthy environments that do not restrict them from making decisions about their lives, their bodies, and on behalf of their families.

﻿Join us to stand up for the rights of women and to support the fight for women’s equality.

This statement of purpose is in addition to the official Unity Principles of the Women's March. Those principles can be found here: https://www.womensmarch.com/principles/

Please get in touch at [email protected] if:

- You are part of a group that would like to add your name in support of this march.

- You would be willing to translate the Statement of Purpose.