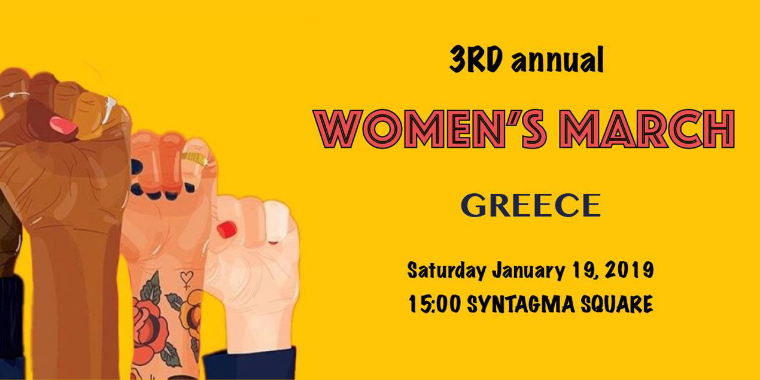 In January of 2017 American women took to the streets to protest the Trump election. Millions around the world joined in.

In 2018 American women returned to the streets and women of other nations came out in even larger numbers, realizing the synergy of the issues we were all confronting.

In 2019 it's no longer just about Trump or American women's issues. The issues that women confront around the world are comparable. Working together, we can right the injustices and bring true equality to our societies, so that men and women can provide the environment their children need to grow to full potential.

In light of this synergy, the Women's Caucus of Democrats Abroad Greece would like to invite all Greek and third country women's groups to cosponsor or co-organise this year's march in Athens on January 19. We envision a march similar to last year's except bigger, more inclusive and more visible.

From this annual event, now in its third year, each group can take action on those issues that our members find most pertinent and also learn about the issues that affect other groups and all of us as a whole.

Our vision is equality and inclusivity. This movement is about supporting all women, without judgment, without pushing a specific lifestyle. We are not interested in women having to fit a particular mold, but rather in women being legally supported and equal to men under the law, no matter their life choices.